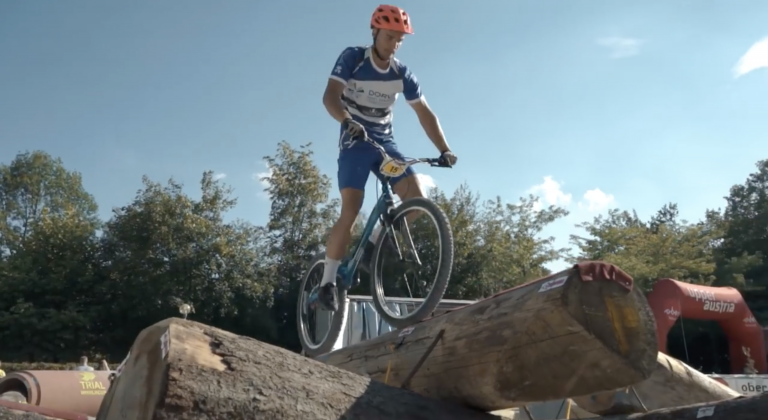 Trials is one of the most exciting and spectacular UCI cycling disciplines.

Unlike other types of cycling disciplines, Trials is a sport where the main factors are the stability and the control of the bike in extreme situations where speed also plays an important role.

The discipline started in the 1970’s in Europe and grew as an off-shoot of the motorised version of the sport. After several years, it became clear that Trials had more in common with cycling than motorcycling. Thus, since 1985, Trials has been fully integrated discipline at the International Cycling Union and has rapidly developed as a cycling sport.

Whether it takes place in the forest or in the city, the sport is practiced around the world by children as young as 5 years old through to adults over 40 years of age. Nowadays it is generally accepted and recognized that the skills, control and experience gained in the Trials discipline are fundamental to developing the skill sets required by other cycling disciplines and that of motorcycling too.

The objective of this sport is to get over obstacles grouped into sections, without setting foot on the ground or any part of the bicycle (only the wheels) touching the ground as this incurs penalties. After negotiating a series of sections, the rider who has the fewest penalty points is declared the winner.

The following categories are officially recognised by the UCI:

The UCI Trials World Youth Games is the most important international event for boys and girls under 16 years old, the first edition of which took place in 2000.

Street Trials
The last few years have seen a revival of the Trials discipline, with strong influences from freestyle and urban Trials. A new trend is developing in the cities.

As its name indicates, this variant of trials takes place on the street using features found in an urban environment. A more fluid variation, it encompasses the same skills as competitive Trials competitions: very precise control of the bike, jumps and balancing on very narrow obstacles.

Riders use props such as walls, railings, or any object which they can get on and off of with their bike in order to carry out a sequence of figures and stunts.

Speed Trials
A two-rider race against time. On a short (about 10 – 15m long) and symmetric track full of obstacles, two riders take the start, the first to prevail over all the obstacles is declared the winner.

We use cookies to ensure that we give you the best experience on our website. If you continue to use this site we will assume that you are happy with it.Ok